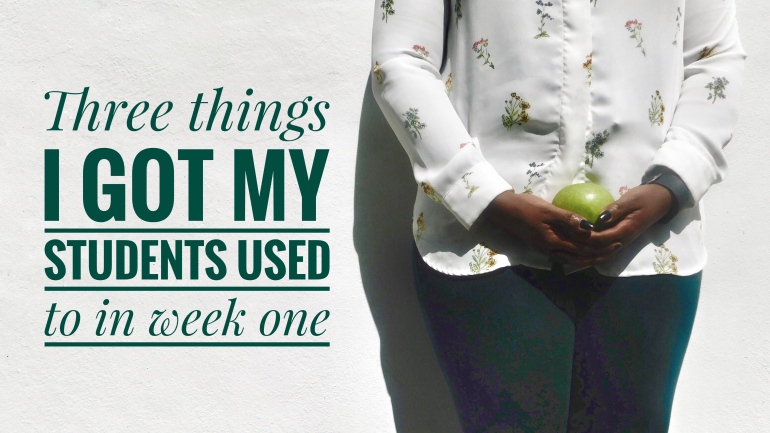 I always skip past the thoughtful intro to a blog post and go right to the meat. I’ll do you a favor and cut loose the pleasantries.

I noticed I was intentionally getting my students used to three things in week one and here they are:

Being wrong- This nonsense about protecting the student’s ego and not making them feel bad when they say the wrong answer is ridiculous. There’s a world where everyone is politically correct because they are afraid of offending their neighbor. This place is called America and the problem is rooted in a bunch of people who are afraid of saying the wrong thing. I’m sick of living in this world. I must cure my students of this disease. On the other hand, the Land of the Free is responsible for some of the world’s greatest innovations at the expense of multiple erroneous attempts. If they continue to be afraid of being wrong we will loose the entrepreneurial edge that makes this country so great.

Rather than tip-toeing around their often wrong answers I make light of the moment by making a joke. For example, Sabby was having trouble converting radicals to rational exponents (most of you just read blah blah which is fine because it has no bearing on the story) and she’s spitting out answers and NONE of them are correct. It was torture. I am saying silly things like, “Sabby you’re killing me. Sabby I am dying a slow death, Sabby bring me back to life, I’m going to go do this on the board because Sabby’s gonna keep me here alllll day and ain’t nobody go time for that.” The whole room is giggling including Sabby. It’s not embarrassing to be wrong, it is part of the process of being right. In our class it is way more embarrassing to be the person not contributing or not trying. I never want them to have anxiety about being wrong. Cut it with humor and rip off the I-don’t-want-to-be-wrong band-aide.

Disclaimer: I will say that if the kid isn’t laughing at your hilarious joke, put a 20 in their therapy jar and move on. The damage is already done.

Being seen– My students sit really close to each other. Almost like their in a booth at restaurant. This is a nightmare if you’re a lefty. I had one of my students move one seat over because he was constantly rubbing elbows with his neighbor (not the good way either). Most of us have a Right-Handed-Privileged view of the world. Lefties just deal with it. They learn to shake with their right hand, use right-handed scissors (which the rest of us just call scissors) and the list goes on. This poor kid was sitting convoluted in his desk trying his best not to clash into his neighbor’s weinis. I bet he would’ve stayed that way the entire year because he’s used to being overlooked and adapting to a right-hand dominated society. Ninety percent of the world overlooks his struggle. It wasn’t a big deal, I was just paying attention. Its those teeny moments compounded over a long period of time that make a difference.

Being respected– Let me tell you about my student named Beckford. His name isn’t really Beckford but maybe he has the same first name as someone famous with the last name Beckford. I’ve already said too much. Beckford on day ONE was being loud and obnoxious. We all know the efforts I put into My Day One. He had a buddy come to class and he was shouting out her name like he was in the streets. I warned him over and over and then I told him to change seats. This is still the first day of school. Beckford argued. At first pleasantly and tried to negotiate with me but THEN abrasively and proceeded to tell me that I was making a mistake. Well, I never! It’s super easy to snap back and show them who’s boss and sass him real good. I didn’t. Instead I told him, “Beckford, listen, I’m not arguing with you. You are going to change seats and in three weeks you will love me cuz I’m the G.O.A.T.** Ask anybody.” When he arrived at his new seat I said, “thank you” like I do anytime a student does what I ask. I do that because my expectations are simple: respect yourself, respect others and respect your environment. I always promise to uphold the same standards. Also being funny and relatable is a major key. Beckford and I are besties now. Only took three days.

I’ll be honest before I started blogging I didn’t put much thought into how I create classroom culture but we all have a science we put into practice. I’m having a blast figuring it out. I’d love to hear some of your practices!

**G.O.A.T.-  Some high school vernacular that means Greatest Of All Time, usually expressed with this emoji: 🐐 and often referring to Mohammed Ali. 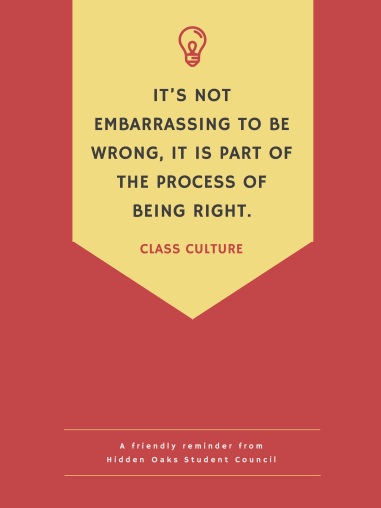